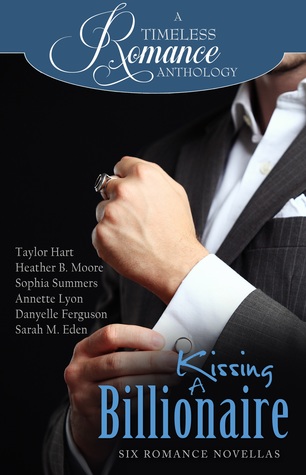 THE UNDERCOVER BILLIONAIRE by Taylor HartWhen billionaire, Mia Jagger, goes to Wyoming to covertly evaluate a ranch in foreclosure, she never anticipates falling and hitting her head. When she wakes up and doesn’t remember who she is, admittedly, she’s afraid, and all she wants is that blue-eyed man who held her hand in the hospital. Ross Charm doesn’t want to take a woman who can’t remember anything back to his ranch, but she keeps insisting and he can't leave her on her own. When her family shows up and they both learn the truth, they must make a choice: let the past keep them apart or let true love have its’ happily ever after.BE MY PLUS ONE by Heather B. MooreAmanda Wurst has been preparing for months to meet with a group of venture capitalists and get funding for her app, but twenty minutes into the meeting, she’s both humiliated and embarrassed. Packing up her things, she takes off for the elevator, only to be joined by Jeremy Lode, the president. He apologizes and offers her a partnership for her new app product. At first, Amanda wants to turn him down out of pride, but his offer is too good to refuse. Besides, Jeremy Lode is an intriguing man in more ways than one.TO HIDE AND TO HOLD by Sophia SummersLake Tahoe never looked as good as it did the day Chad meets Grace. But when his own life spirals into crazy with his parents trying to set him up with a woman, he’s happy to keep things on a first name basis with Grace. Brilee Grace Townsend loves her eggshell camper, her campground, and her Huskie. Hiding out while she writes about working with a Senator and then walking out on her parents and fortune, seemed like the best part of her Spring until she met Chad. When Chad discovers Grace is the very girl both their parents hoped he would date, he couldn’t be happier. When Grace finds out, she never wants to speak to him again.BOW TIE OR THE BILLIONAIRE by Annette LyonLauren has built a cosmetics empire and now lives a great life in Europe, with more money than she could ever spend, and a cottage of her own off the coast of Helsinki. But business life has taken a toll; she yearns to return to the laboratory. She’s decided to partner with another company, Carmichael Enterprises. But when she meets the head of the company, it’s clear that Carmichael has no intention of continuing her charitable donations. Worse, he wants to move the headquarters. Too bad she can’t partner with Carmichael’s assistant, Eric. He’s smart, funny, and kind. He even visits sick children in hospitals as Bow Tie the Clown. Lauren finds herself falling for Eric, but chances are slim of that anything can come of it, not when she’s about to cut off negotiations with his billionaire boss.HOW TO WOO A BILLIONAIRE IN TEN DAYS by Danyelle FergusonLove is the last thing on billionaire Penny's mind, but when her grandparents dangle a seat on the Wessex Resorts board of directors in exchange for her entering the dating scene, Penny takes the challenge. Mac is at the resort for a hockey player's bachelor party. When one of the rich players flirts with Penny and gets rejected, he bets run-of-the-mill Mac can't get a date with her. With every date, Mac's bet fund for his business grows, but so do his feelings for Penny. As time runs out, he'll have to choose between wooing the billionaire for money or for love.THE BILLIONAIRE ABROAD by Sarah M. EdenWhen bachelor billionaire Sterling Westcott hires Keighley Ainsworth to plan an important event in Dublin, she jumps at the opportunity. Time alone with her budding crush in a city she’s always wanted to visit? Yes, please! But local event planner Brogan Malone soon weaves a spell of his own, making her begin to question everything she thinks her heart wants.