Lu Ann Staheli, a contributor to the SILVER BELLS COLLECTION, lost an 8-month battle with cancer on February 9, 2015. We will miss her greatly. Below is a life sketch: 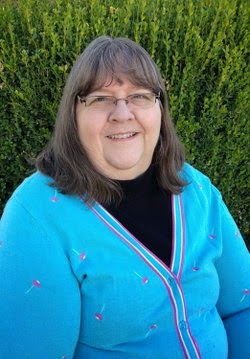 Lu Ann Brobst Staheli got her start as a celebrity paparazzi-stalker-chick, which led to her award-winning career as a ghostwriter for celebrity memoirs. A masochist at heart, she taught junior high school English for 33 years and then moved to the school library. She once spent two weeks summer vacation backpacking through Europe with 15 of her students. She has won three Best of State Medals--two for writing and one for teaching--but refuses to wear them all at the same time because she'd hate to be known as a show-off.
Staheli graduated from Alexandria-Monroe H.S. in Alexandria, Indiana, in 1972, and the Indiana University Bloomington School of Education in 1976. She taught English and psychology at Rockville Jr. Senior High School in Rockville, Indiana, for five years before moving to Utah. In 1984, Lu Ann joined the staff at Payson Jr. High School in Payson, Utah, where she taught English, Writing for Publication, and Reading Options, and most recently she has worked as school librarian. Lu Ann also holds a Master’s Degree in Instructional Technology with a Library Media endorsement through Utah State University’s School of Education.

As a Senior Editor with Precision Editing Group, she has had a hand in a number of releases from Deseret Book, Shadow Mountain, Covenant Communications, and other regional publishers, including several winners and finalists for the Whitney Award, and USA Today and New York Times best-sellers. A former Associate Producer of Alan Osmond's Stadium of Fire, Lu Ann resides in Spanish Fork, Utah, with her husband, and tries to keep track of their five sons.
Lu Ann is a teacher of teachers. Two of her former students teach with her at Payson Jr. High, one is an administrator there, and numerous others have entered the education field. She has been a mentor to four student-teachers, all of whom have continued in the field. In addition to helping students become teachers, she also has moved students to careers in creative writing and journalism, but perhaps the most successful thing she has done is encouraged a generation of lifelong readers.

During her years as an English teacher, Lu Ann has shared her love of reading and writing with over 4,000 students, and it doesn’t look like she is ready to stop teaching them anytime soon. “Once my student, always my student” is her personal philosophy, and her students seem to know that without ever being told. They come back to visit her classroom years later, stop her in the local grocery, and track her down via the Internet to ask her for book recommendations, tell her about their latest writing project, or share a favorite memory from a long-ago class she taught. Through shared literacy, students develop a sense of connection to Lu Ann that leads them into an adult world where books and writing are important. The fact that many of her own students have become teachers, and that she also mentors student teachers, broadens her influence even farther across the state and perhaps the world.

“Until I’ve given them a million words, I can’t teach them how to write,” describes the beginnings of an English program under Lu Ann’s tutelage. “So many students come to me—even in my Honors programs—with a limited view of reading and a fear of writing. A boring book or a single blood-red paper returned from a well-meaning teacher can halt a student’s progress toward engagement in reading or improvement in writing for years, sometimes even a lifetime.”

To help her students overcome those fears, Lu Ann begins her school year with reading. She teaches strategies and tips to improve reading skills, no matter what level a student currently tests, then she gives them plenty of time to practice those skills. She reads high interest books aloud to them, lets students read in small groups, and includes time for plenty of independent reading, providing audio books for students who need additional reading support. “The more words I can put in front of them, the more likely they will discover something—a book, short story, poem, or piece of non-fiction—anything that will hook them, giving them a reason get excited about reading and hopefully leading them to reading on their own. If it takes giving a student something new to try every day, then I’ll do it. All it takes is one book—the right one—to make a lifelong fan of reading.”

In addition to reading, Lu Ann leads her students into writing fluency. “Getting words down onto the page is hard for most people, but this is especially true of junior high students who are already a little insecure. I believe in letting students feel comfortable with writing, validating their efforts and ideas, long before I make corrections and suggestions.” A professional writer herself, Lu Ann teaches the craft of writing rather concentrating during early draft stages on the skills of editing. “Editing is the final process in writing. Too many teachers seek perfection from their students long before the work is ready. Editing too early can ruin voice, stop the flow of fresh ideas, and squelch any student desire to attempt, let alone perfect, a piece of writing,” she says. This process of building readers, then teaching the craft of writing, has found Lu Ann’s students of all ability levels not only among the highest scores on a variety of state and standardized tests, but also eventually following career paths that allow them to use these skills without fear.

“People who read succeed, or so the slogan goes. If a student reads well, school is easier for him or her. The information disseminated via teacher lectures, textbooks, and other materials becomes accessible and interesting,” Lu Ann states. “Eventually my students leave the junior high school. Most of them graduate from high school. Obviously, those who leave with reading and writing skills will move on to successful careers that add to the economy,” something Lu Ann herself does through the various employment and volunteer opportunities she follows beyond her work in the classroom.

In addition to teaching, Lu Ann has long served her local community. As a member of the staff at Alan Osmond Productions, Lu Ann was an Associate Producer for Stadium of Fire, a member of the Spanish Fork Arts Council, State Coordinator for the National Council of Teachers of English’s Promising Young Writers program, on the Speaker’s Bureau for the League of Utah Writers, and has been on the Middle Level and Young Adult Book Selection Committees for the Children’s Literature Association of Utah. Lu Ann served as coordinator for the Spanish Fork City Arts Council Writer’s Workshop and the Nebo Young Writer’s Conference. She is often called upon by church groups, book clubs, and other members of the local and state community to present workshops on literacy, give book reviews, or serve as a judge in writing contests. She has worked on district and state textbook and media adoption committees, as well as helping to write the previous state CORE for Secondary English Language Arts.

Lu Ann has earned several awards and recognitions through her teaching career, including Nebo Reading Council Reading Teacher of the Year 2006, Christa McAuliffe Fellow Utah 1999, Utah English Language Arts Teacher of the Year 1999, Excellence in English/Language Arts Instruction 1999 from the Utah Writing Project, and Celebrate Literacy Award 1996 from the Utah Council IRA. She was selected for the USWest/UtahLINK Teacher Network Project 1995, the Marquis Who’s Who in American Education for several years, and has previously been nominated for both the Disney Hand Award for Outstanding Educators and the Huntsman Awards for Excellence in Education.

As the past-President of the Utah Council of the Teachers of English Language Arts and the League of Utah Writers, Lu Ann currently serves on the board of the Nebo Reading Council and the UVSC Forum on Children’s Literature. Through her newspaper column and personal donations, she helped the Nebo Reading Council build a library collection for the Nebo School District Young Mother’s School in 2008.