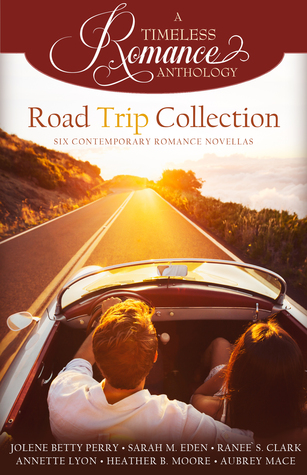 WHAT FALLING FEELS LIKE by Jolene Betty Perry
High school was years ago, and Kendell is ready to admit that Tyler, her best friend’s younger brother, has matured into a good-looking man. But the once-popular Kendell is recovering from a marriage-gone-wrong, and she regrets turning Tyler down for high school prom. On their road trip to deliver a refurbished camper, Kendell rediscovers all the reasons she liked Tyler, but it might be too late to rekindle their friendship.

ANTIQUES ROAD TRIP by Sarah M. Eden
Kelsey is living out her dream for the weekend as she participates in a reality show contest by living on a 19th century film set. The contestant who wins the show receives a trip to England and $100k, more than enough to get her through grad school. When she meets Devon, who was coerced by his sister to participate, friendship blossoms. When things go wrong for Kelsey, Devon is there to help, and she soon realizes that winning the contest isn’t what she most desires.

WOULDN’T IT BE NICE by Ranee` S. Clark
When Jacqueline's boyfriend Colin drops out of their long-planned road trip with friends to put his job first—again—it's the final nail in the coffin of their dying relationship. But then Hudson, her best friend’s brother, takes Colin's spot for the road trip, and Jacqueline’s disappointment in her ex takes a back seat to the chance for reestablishing the close ties she once had with Hudson. When their friendship detours into romance, it forces Jacqueline to question her reasons for breaking up with Colin and her future with Hudson.

HEAD OVER HEELS by Annette Lyon
Tristan is proud to be an entrepreneur, running a popular singles’ lifestyle blog. So when she gets an offer to cover a singles convention in Las Vegas, she needs to find a way to get there from another freelance job in Salt Lake without breaking into her personal savings. Her friend sets her up with a co-worker who happens to be driving that way, and Tristan is more than surprised to come face-to-face with a man she has a lot in common with, not to mention seems to click with right away. The two decide to play a prank on Tristan’s friend, and pretend that they are smitten with each other, but soon, the lines between pretend and reality start to fade.

TWO DOZEN ROSES by Heather B. Moore
Dayna reluctantly takes time out of her busy work life to drive her mother up the Pacific Coast Highway from California to her brother’s home in Oregon. Strangely enough, they keep running into two brothers who are traveling the same route in honor of their sister’s memory. The older brother Garrett is a merciless flirt, but the younger brother Roman is who captures Dayna’s attention. Soon she realizes that the brothers are extremely competitive, and she’s just become their next target.

TRY, TRY AGAIN by Aubrey Mace
Sarah’s secret crush on Justin takes a sudden turn when he breaks up with his girlfriend and declares that he’s interested in Sarah. She believes he’s just on the rebound, and they slowly drift apart. Six months later, Sarah still can’t stop thinking about what might have been. She ropes her friend into taking a road trip to visit Justin, hoping for a second chance. When Justin sees her, he wants answers, and Sarah has to decide if she’s brave enough to finally tell him the truth.