Under the Mistletoe Collection 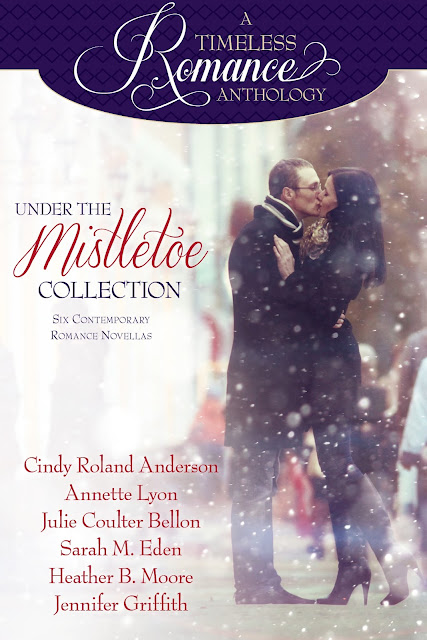 A Timeless Romance Anthology: Under the Mistletoe Collection

Amazon #1 Bestselling series in *New Release* for Clean RomanceSix Award-Winning Authors have contributed new stories to A Timeless Romance Anthology: Under the Mistletoe Collection. Six contemporary novellas, all adding sweet romance to the Christmas season. In the enchanting novella FORGOTTEN KISSES by Cindy Roland Anderson, costume designer Madison Taylor has no love lost when the male lead playing Sir Lancelot in a TV series is fired. She couldn’t stand working with him anyway. But when she discovers who his replacement is, her heart nearly stops. Caleb Matthews is one of the hottest male actors ever… and not to mention Madison’s former boyfriend. When things got too serious between them, everything fell apart. And now, Madison must play nice or lose her job. She just has to forget all of the reasons she’d fallen for him in the first place.In THE LAST CHRISTMAS, a sweet romance novella by Annette Lyon, Meredith only has to make it through the Christmas holiday pretending that she and her husband Eric aren’t on the verge of divorce. She doesn’t want to ruin the holiday for her two grown daughters and their boyfriends. But when Eric hurries home after weeks of living in a motel to unpack before their daughters arrive, he starts pressing Meredith with questions about why she filed for divorce. The last thing Meredith wants to do it give Eric a second chance, but it seems that Eric is not willing to let her go without trying to win her back.In Julie Coulter Bellon’s captivating novella TRUTH OR DARE After a year of recovery, wounded war veteran Jonah Harrison comes home for Christmas. No longer the outgoing high school track star, he just wants to be left alone, away from well-meaning friends and neighbors. But when a blizzard strands him with Cami Jackson—the girl who once knew him best—he can’t hide anything from her, no matter how much he wants to. Cami has a wounded heart of her own, though, and it might take a Christmas miracle for them to find the healing they both long for and the courage to reach for a chance at love. In the charming novella HOLIDAY BUCKET LIST by Sarah M. Eden, Celeste Lagorio has officially given up on Christmas. A single mother, with her children grown and unable to return for the holiday, Celeste determines to take a break from everything. When her single neighbor and almost-best-friend, Mike Durham, discovers her non-plans, they discuss things they’ve always wanted to do, but never had time. Mike and Celeste put together a friendly competition of checking off the things on their bucket list, all the while drawing closer and discovering they have more in common than they thought.In CHRISTMAS EVERY DAY, a delightful novella by Heather B. Moore, Monica is on the verge of buying her dream store, but when she tells her boyfriend, he turns it into an embarrassing public argument. Heartbroken, but determined to follow her dream, she goes to her employer’s Christmas party to play Mrs. Claus, only to be paired with someone unexpected. A young Mr. Claus who is the complete opposite of her ex-boyfriend in all the most important ways. Yet, Monica is not sure she can risk opening her heart again.In Jennifer Griffith’s exciting novella FIRST (AND LAST) CHRISTMAS DATE, pilot Juliet Law has been in a holding pattern, dating the wrong guy, until she gets a holiday shake-up: old flame Tag McClintock e-mails her to ask for second date—after ten years. Their first date, back in high school, had been an unmitigated disaster culminating with Pepto Bismol and the police. Still, Juliet would have gone out with Tag again the next day—and the next—had he asked. So now that he’s finally popping up in her in-box again, Juliet must decide whether to say yes to the date, even if it puts her at risk of another decade of carrying a torch for Tag McClintock. Will their second date be their last?